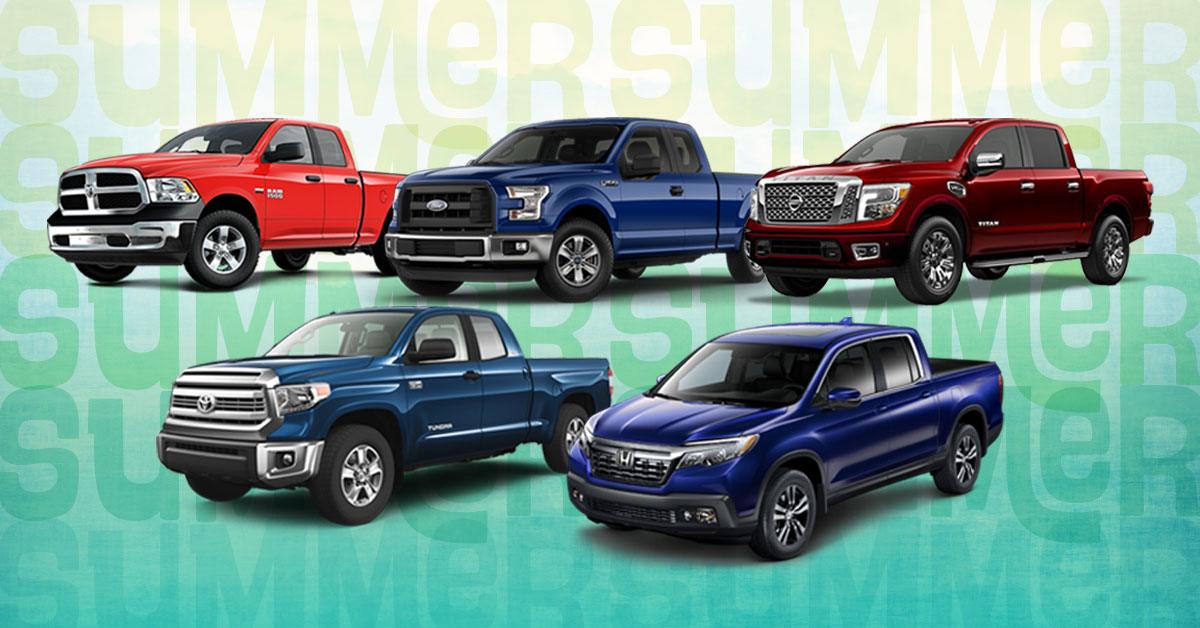 What are you looking for in a truck? A beefy maximum towing capacity? Major power underneath the hood? Best-in-Class 4X4 capability? Or maybe something with the latest technology and features? With over 10,000 vehicles across 38 dealerships in Edmonton and Western Canada, there’s no doubt Go Auto has the right truck for you.

In the 2017 Toyota Tundra, you have an option between two powerful V8 engines: A 4.6L and 5.7L. A six-speed automatic transmission and rear-wheel drive come standard, while a four-wheel drive is an option on all models. There are three-bed lengths — a 5.5-foot short bed, a 6.5-foot standard bed and an 8.1-foot long option. Keep in mind, the crew-cab models can seat up to six, depending on what seats you choose.

In terms of features, there are plenty to go around. The Tundra features a high-end interior with top-of-the-line technology. Every model is outfitted with Toyota’s Entune touchscreen with Bluetooth functionality and essentials like air conditioning, cruise control, and a rearview camera all come standard.

The F-150 sees some major updates for the latest model. This includes Ford’s turbocharged 3.5-liter V6 EcoBoost engine and 10-speed transmission, both of which are brand spankin’ new. The new transmission features a tow/haul mode designed for when your truck is fully loaded. It helps drivers maintain a constant speed when traveling up a steep incline.

When you combine that new engine and transmission with an all-new lightweight aluminum body, not only do you have more horsepower (375) and Best-in-Class torque (470), you reap the benefits at the pumps, too. The 2017 Ford F-150 gets  12.2 L/100 km in the city and 9.3 L/100 km on the highway making it more efficient than it’s predecessor.

Let’s talk towing. After all, that’s what the F-150 does best. Not only does the 2017 F-150 boast a best-in-class towing capacity of 12,200 lbs. it leads its class in payload capacity (3,270 lbs.) too. And then there’s all that towing technology. When you drive an F-150, you’re outfitted with every towing tool imaginable to get the job done.

Features like an available integrated trailer brake controller, trailer-tow mirrors, and a 360-degree camera system — which give you a view of all four sides of the vehicle — are just some of the ways Ford’s technology is lightyears ahead of the rest. It’s obvious why the F-150 continues to be Canada’s best-selling truck.

Even thought the pickup segment isn’t an easy one to be a part of, Honda’s found a way to carve the Ridgeline out a proper niche anyways. As far as smooth rides go, the Ridgeline has one of the best. Thanks to Honda’s four-wheel independent suspension and 3.5-liter V6 that offers owners 280 hp and 262 pound-feet of torque, the Ridgeline glides over bumps. Paired with a six-speed automatic transmission, the Ridgeline comes in seven trims and seats five.

While a towing beast it’s not (the Ridgeline’s maximum towing capacity sits at just 5,000 lbs.) it certainly brings more to the table than just pull. The Ridgeline’s truck bed is where Honda’s innovation really takes off. With a two-way tailgate, a lockable in-bed trunk and what the automakers call “the ultimate tailgating experience” — a six-speaker sound system incorporated into the pickup bed’s walls – the Ridgeline is no doubt the most innovative and configurable truck bed in the segment.

The Ridgeline’s interior is nice, borrowing high-end luxury materials from its Pilot SUV counterpart. Finally, it ranks highest when it comes to comfort – think loads of leg room and a comfy cushion for your bottom.  It might not be your first choice if you plan on towing a lot this summer, but it’s definitely the truck you want for a tailgate party.

In the 2017 Nissan Titan, there’s only one engine option: The 5.6-liter, Endurance V8 which gives drivers 390 hp and 394 lb.-ft. of torque (which is more oomph than both the Ridgeline and Ram). Paired to a seven-speed automatic transmission, the Titan comes in RWD and AWD is an option on all models.

The 2017 Titan comes in five trims, the last of which, the Pro-4X, is perfect for those with off-roading in mind; 4X4 is standard. The standard size for the crew cab truck bed is 5-foot-7-inches, but if you’re looking for a little more room you can opt for an 8-foot long single-cab bed.

When you’re comparing the Titan to some of its counterparts, where it really shines is modernity. While trucks like the Ram 1500’s cabin feel slightly outdated, the Titan is plush with features and amenities. The technology is easy-to-use and innovative and the seats are comfortable enough to withstand long commutes.

Buyers have the option to add packages, too. There’s the SL Towing Convenience group which includes things like tow mirrors and a trailer brake controller. Buyers can opt for a rear-seat DVD entertainment system for the family. Or, if you’re looking to class it up, add leather upholstery and a Rockford Fosgate 12-speaker audio system.

What’s brilliant about the Ram 1500 is the choice owners have between engines, power and the type of performance they’re looking for. The 2017 Ram 1500 comes standard with a 3.6-liter gasoline V6 engine that puts out 305 horsepower and 269 lb.-ft. of torque.

Ram only offers an eight-speed automatic transmission, regardless of what engine route you take. Rear-wheel-drive comes standard, but there are two available All-Wheel-Drive systems.

In terms of towing, the F-150 beats the Ram by a few hundred pounds, but that doesn’t mean that the 1500 isn’t still a capable tower. Rams loaded their prized half-ton full of driver-assisted towing technologies including Trailer Sway Control and Tow/Haul Mode.

You also have a variety of options when it comes to body styles. The regular cab seats three while the quad and crew cab both seat six. You can stick with the regular cab and choose either a 6-foot-4-inch or an 8-foot cargo bed. Or, you can commit to a quad with a 6-foot-4 bed. The crew cab guarantees owners bigger rear doors, more legroom and a choice between either a 5-foot-7 or 6-foot-4 bed.

Whether you’re an avid camper or just enjoy the occasional weekend at the lake, you need a truck that can keep up. You need power, capability and the right technology to tow whatever you need, whenever you need.

Here’s where these five trucks stack up in terms of towing.

2017 Honda Ridgeline – When equipped with Honda’s 3.5-litre V6 engine and standard trailer hitch, the Honda Ridgeline can tow up to 5,000 lbs. And while that’s not as much as some of the bigger towers on our list (namely the F-150), it’s certainly enough to get the job done. Especially if your towing needs aren’t heavy duty.

2017 Nissan Titan – Nissan’s 5.6 L V8 engine puts the strength of a technological powerhouse under your foot. With Direct Injection, a 4-valve-percylinder design, and a Variable Valve Event and Lift (VVEL®) technology drivers get an outstanding 390 hp. and 394 lb.-ft. of torque while fuel efficiency is substantially improved from Nissan’s previous model.

2017 Ram 1500 – The Ram 1500 is engineered with towing capabilities that reflect real-world conditions. So when Ram says your 1500 can tow up to 10,640 lb. and haul a payload of up to 1,880, you know with confidence that it’s true. Plus, all Ram 1500s come standard with a 4- and 7-pin wiring harness and an integrated Class IV hitch receiver and Trailer Brake Control system.

Which Truck is Right for You?

Five great trucks, each with their own set of performance specs worthy of comparison. Now you just need to choose which one is right for you. Knowing you’ve got the perfect truck gives you all the confidence you need.

You Should Be Driving a Tundra If….

You’re looking for something capable as well as affordable. The least expensive pick on our list, the Tundra is as capable a truck as any. It sports one of the better towing capacities (10,400 lbs.) and offers more than enough hp under the hood.

You’re #1 priority is towing. The Ford F-150 is the undisputed leader in the towing game. Not only does it tow more, it tows smarter than most trucks in the half-ton segment. Plus, thanks to its high-steel aluminum body and EcoBoost engineering, your wallet doesn’t suffer at the pumps after a weekend of towing your fifth-wheel.

You Should Be Driving a Ridgeline If….

You’re #1 priority is hauling. Honda’s secret sauce with the Ridgeline is the truck bed. It’s long (64 inches), it comes with a storage box hidden underneath (sealed to keep your cargo dry and doubles as a cooler), and a two-way tailgate which makes for easy access. Oh, and if you want to party you can opt for Honda’s actuators that vibrate the cargo bed in sync with the music.

You Should Be Driving a Titan If….

If you want a diesel. After all, it is Canada’s only diesel ½-ton option. Engine options are plentiful and towing capacity and payload are second only to the F-150. While the interior and tech may not be as fresh as say the Ridgeline or Titan, there’s no denying it’s an absolute workhorse.

The 5 Best Trucks for Towing More

Which Full-Sized Truck is For You? (2018 Truck Comparison Guide) More