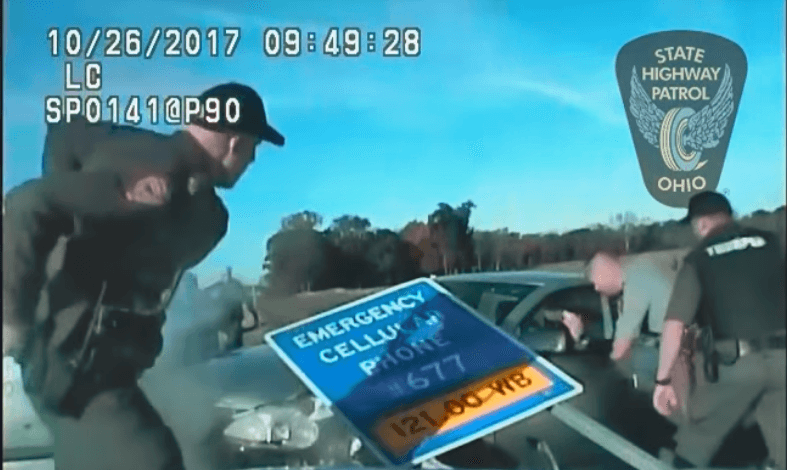 You don’t have to look too far to find something weird in the news these days. But, believe it or not, there are things happening outside the Oompa Loompa in the White House. Some strange happenings in the automotive world went completely the under the radar. Welcome to the weirdest car news stories of 2017 … part 2!

In our last segment of weird car-related news, we told about the Russian man who crashed a tank into a liquor store for a bottle of wine, a girl who traded in her McDonald’s Szechuan sauce packets for Volkswagen Golf GTI, and so much more. This time around, we bring you more of the same ridiculousness. Read on and find out what mind-boggling things have been happening on the roads.

It’s commonly said that the two most common elements in the universe are hydrogen and stupidity, which isn’t so hard to believe considering the amount of the latter involved in the actions of a 25-year-old man in Connecticut early in March, 2018.

According to the Associated Press, Jonathan Rivera drove to court to answer a charge over a stolen car in another stolen car.

Parking authorities scanning license plates noticed a car in the lot had been reported stolen, so they alerted the police. The police surveyed the car, waiting for the thief to return. Sure enough, Rivera was the one to get in the driver’s seat. He was arrested on the scene.

Police in Kansas City, Missouri, were led on a high-speed interstate chase last month by a naked man on an ATV. Yup, you read that correctly – the man was indeed in the nude, and he was indeed on an ATV. Not only that, but he going fast, down the wrong side of the highway. Apparently, he had a need for speed, as well as a definite need for underwear.

The video was captured by local Jeff Fishell, and it shows Jonathon A. Menth, 27, cruising down the highway, police in hot pursuit. He was eventually thrown off the ATV when he struck railway junction boxes. He was admitted to the hospital for his injuries, but luckily, no one else was hurt during the incident, except maybe those blinded by the man’s white-as-bones behind.

Menth gave an odd explanation for his actions, one that involved his escape from a man named Jeffrey. What does remain a mystery, though, is at what point he lost his clothes. The police report also revealed drugs played a role in the affair… shocker.

#3 A Montreal Man Was Ticketed for Singing in His Car

We all like to sing in the car. There’s something about the acoustics of vehicle cabins that make our voices sound markedly less crappy than usual. It’s either that or the loud volume is drowning out the missed notes and voice cracks. But whatever the reason, we all do it and we all think we’re talented.

One man in Montreal, however, found out in a tough way that he didn’t exactly have a pristine voice. Taoufik Moalla, 38, was issued a $149 ticket as he was driving to the grocery store for “screaming in public”. Yet according to Moalla, the ticket is unfair, as he was simply belting along to his favourite tune, “Gonna Make You Sweat (Everybody Dance Now)”, by C+C Music Factory.

Moalla has contested the ticket, but his wife understands the actions of the police, reportedly telling her him, “If it was for singing, I’d have given you a ticket for $300.”

Automotive enthusiast, drug dealer, and marketing genius Daniel Vasquez has been taken into custody for allegedly using his auto repair shop, aptly named “Get Your Fix Automotive”, as a front to sell methamphetamine, heroin, cocaine, as well as firearms to customers.

Vasquez, 30, has three prior felony convictions for possession of controlled substances, and this time he faces two felony firearms counts worth a decade in prison, and a maximum $250,000 fine.

#5 A Koala Hitched a Ride Behind a Car’s Wheel

In September 2017, an Australian man was surprised to find a female Koala clinging to the inside of her car’s wheel arch after having driven nearly 10 miles. The fire brigade had to be called to take the wheel off in order to safely remove the furry friend from its position, but aside from some minor injuries and being understandably distraught, the animal was O.K..

Wildlife workers determined the Koala had recently given birth, and sadly, her joey (an infant koala) was never found. After some time in captivity, the Koala was released back into the wild.

The Australian government declared Koalas as vulnerable species in 2012.

#6 A Highway Crash Split a Car down the Middle, and the Driver Survived

Last year, in California, a woman survived an accident that saw her car split right down the middle. A video taken by a witness at the scene shows the 26-year-old woman, Apol Lansang, stunned, still sitting in the driver’s seat of her Chevy Impala, while the other half of her vehicle is strewn about the rest of the highway.

The collision was with a Toyota Sequoia, driven by Kevin Fenty, 27. Fenty was ejected from his vehicle, but luckily, both he and Lansang sustained only moderate injuries.

Kenny Bachman was a little confused, to say the least, when he woke up in a Toyota Sienna minivan Uber with the fare running close to $1,600. Bachman had been drinking with friends on a night out in Morgantown when he decided to order an Uber to take him back to where he was staying near the West Virginia University campus. He then promptly passed out, only to wake up on the finishing end of a more than 300-mile drive back to his home in Camden, New Jersey.

Bachman disputed his bill with the ride-sharing company, reportedly denying he entered his home address in New Jersey as his destination, but in the end, he had to pay the full fare. The total cost was $1,635.93.

He also accidentally ordered an Uber XL, which can hold more passengers and costs more than a regular Uber. Surge pricing also had its effect on the bill.

When all was said and done, Bachman gave his Uber driver a full five-star rating.

Ohio police were led on a high-speed chase by a 10-year-old boy in October, 2017. The boy–whose name cannot be divulged, as he is a minor–took his father’s car from their home in Cleveland. At one point he hit 100 mph (or 160 kph).

The craziest thing about the whole debacle, though, was that it was the boy’s second time leading police on a car chase that month. Two weeks earlier, he took his mother’s Dodge Charger and was caught driving down the interstate on three flat tires.

Remarkably, the 10-year-old is still a better driver than a lot of people you’ll see driving on the QE2 highway.