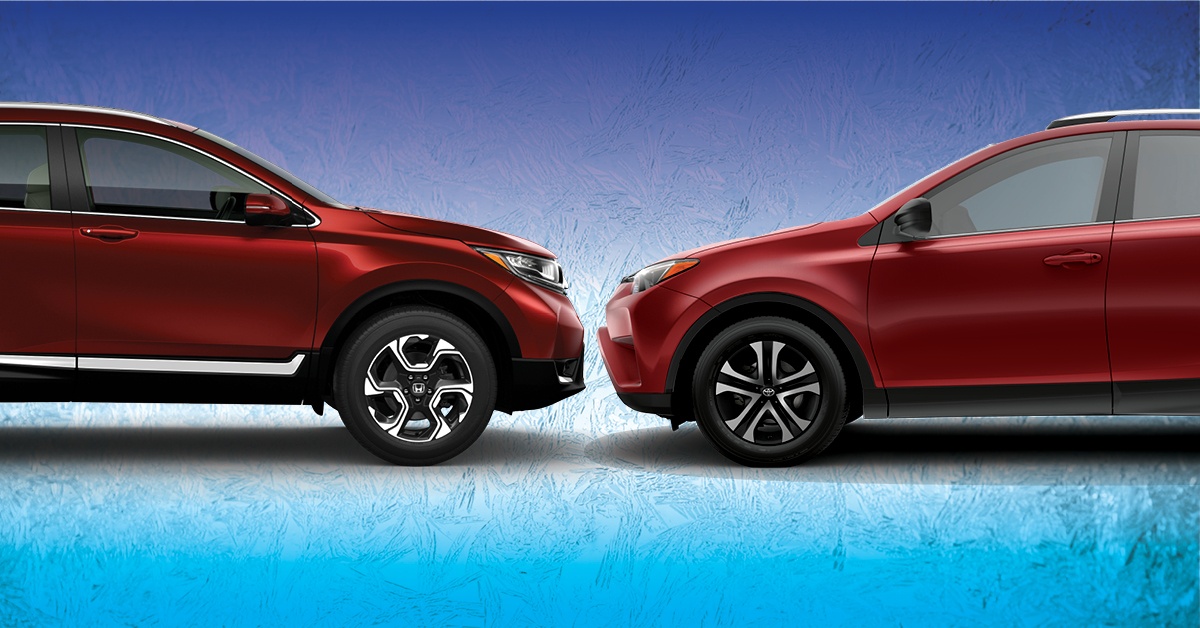 In the market for an SUV? If so, chances are you’re considering the Honda CR-V or Toyota RAV4. Both offer consumers a long-standing reputation for reliability, as well as two of the best fuel efficiency ratings in the segment. The question is… Which SUV should you buy?

Comparing the 2017 Honda CR-V vs 2017 Toyota RAV4 is difficult, especially when there are so many similarities between the two. There are some differences, though, and knowing them will help you choose the right SUV for your family.

Families need space. Luckily, both the Honda CR-V and Toyota RAV4 are class-leaders in cargo capacity and interior volume. The RAV4 has 73.4 cu. ft. of cargo volume behind the front seats and 38.4 cu. ft. behind the second-row. For comparison’s sake, the CR-V has 75. cu. ft. and 39 75. cu. ft. for the exact same areas. This gives the CR-V the edge, although the difference is tiny.

When comparing leg and shoulder room, both SUVs are pretty evenly matched again. This time, though, the RAV4 edges out the CR-V by a few cu. ft. (5 and 3, respectively). Where you see the big difference between these two SUVs is in the overall look and feel of the interior.

With heated front seats, soft-touch materials, and an upscale vibe, the CR-V has a more luxurious feeling than the RAV4’s interior. Also, the Touring trim offers buyers perforated leather seats, whereas the RAV4 only offers cloth, even on the highest-level trim.

Parents might also like to know that Kelley Blue Book named the Honda CR-V one of the Best Family Cars of 2016 (it also made our list, too).

If You Prioritize Space and Interior Quality, You Should Be Driving: The Honda CR-V

The Toyota RAV4 is one of the safest SUVs on the market today. Thanks to Toyota’s Safety Sense (TSS) technologies — which comes standard on all trim levels — the RAV4 earned the Insurance Institute for Highway Safety’s Top Safety Pick+ for 2017, the highest crash test rating awarded by the institution.

The Toyota Safety Sense (TSS) technologies combine a camera and lasers to help mitigate or prevent collisions in a wide range of conditions. TSS includes Pre-Collision System with Detection, Lane Departure Alert with Steering Assist, Automatic High Beam, and Dynamic Radar Cruise Control. Toyota has promised that by fall 2017, all of their vehicles will include this group of advanced safety features. Luckily, the RAV4 already does.

While the CR-V LX does come with a few safety features, like Hill Start Assist, the base model isn’t as well-equipped when you compare it with the RAV4. If you want things like Lane Departure Warning and Forward Collision Warning, you’ll have to climb a couple of trim levels.

If You Prioritize Safety, You Should Be Driving: The Toyota RAV4

The 2017 Honda CR-V comes in five trims: LX-2WD, LX, EX, EX-L and Touring with the MSRP falling in-between $26,690 and $38,090 CAD. Honda CR-V features include heated front seats, Apple CarPlay/Android Auto, and a multi-angle rearview camera. These are standard on all trims.

When you add AWD, you’re looking at an additional $2,500 and if you decide to go all out with the Touring trim, the luxuries abound; panoramic moonroof, leather-trimmed seating and heated rear seats are all included.

Every trim offers a RAV4 4WD option for an additional $2,000. And unlike the CR-V, the RAV4 also offers a hybrid ride for the environmentally conscious. Finally, if you decide to spend the money, the Limited edition features one of the nicest sound and entertainment systems in the game; 7.0” JBL Synthesis Audio System with Navigation, Bluetooth®, Bird’s Eye View Monitor, and SIRI Eyes Free.

If You Prioritize Cost and Standard Features, You Should Be Driving: Tie! In terms of price, choosing between the Honda CRV and Toyota RAV4 comes down to how much you’re willing to spend. The RAV4 costs more overall, but it also offers more features on the lower trim levels. The CR-V, on the other hand, costs less overall but offers fewer features on the base model.

The 2017 Honda CR-V comes with either a turbocharged 1.5-liter four cylinder or 2.4-liter four-cylinder engine. The turbo option blasts out 190 horsepower and 179 lb.-ft. of torque. When paired with Honda’s continuously variable automatic (CVT) transmission (the only option for the CR-V), the CR-V driving experience is agile and peppy.  As for fuel efficiency, owners get 6.9 L/100km on the highway, which helped earned the SUV the fifth spot on Kelley Blue Book’s Most Fuel Efficient SUVs of 2017.

The 2017 RAV4 comes with a 2.5L, 4-cyl, Dual VVT-i engine that puts out 176-hp. It gives owners a fuel efficiency rating of 7.6 L/100km on the highway and 10 L/100km in the city. If you opt for the Toyota RAV4 hybrid model, you’ll enjoy the fuel economy benefits that come with it, like a 6.7 100L/km in the city and 7.8 100L/km on the highway. In fact, the RAV4 earned the #1 spot on Kelley Blue Book’s fuel efficiency list, giving it the edge over the CR-V. Finally, the RAV4 is equipped with a standard six-speed automatic transmission which gives owners a smooth drive and quieter engine overall.

If You Prioritize Fuel Efficiency, You Should Buy: The Toyota RAV4

If you Prioritize Power, You Should Buy: Tie! While the CR-V gives owners a little more horsepower, the CVT transmission makes the vehicle a little bit louder. In contrast, while the RAV4 doesn’t have as much power underneath the hood as the CR-V, owners will find it’s a little more quiet on the road.

When you look at the two SUVs side-by-side, there are certainly more similarities than differences. In terms of reliability, both Honda and Toyota are brands synonymous with quality manufacturing over the long term. In fact, J.D. Power and Associates — a global marketing firm known for its customer satisfaction research on long-term dependability — gave both brands an identical rating of reliability.

Both SUVs are also fuel efficient, with the Hybrid version of the RAV4 giving owner’s one of the best ratings you’ll find in an SUV. Price wise, both the CR-V and RAV4 start at over 25K, with the RAV4 Hybrid Limited costing the most at just under $42,000. What gives Toyota the edge here, though, are their industry-leading series of safety technologies that won’t cost you extra; the lowest trim comes well equipped.

In the end, it looks like the Toyota RAV4 might be the best bang for your buck. However, we can’t stress it enough: The race is tight. Both SUVs are two of the best options on the market. Either one is an excellent choice.

The Most Fuel Efficient SUVs of 2018 More

5 Crossover SUVs Perfect For Alberta Families on a Budget More