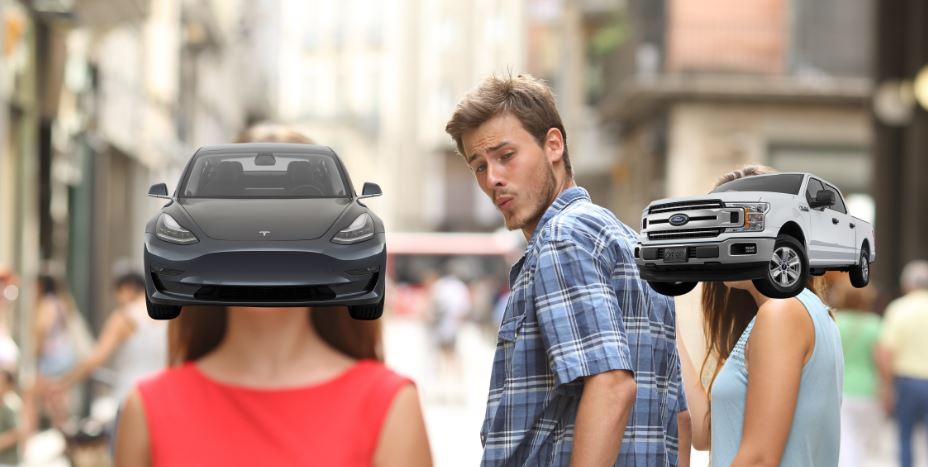 For the fifth year in a row, Desrosiers Automotive Consultants surveyed over 4500 Canadian drivers about the vehicles they’d like to get from Santa. The results might blow your Christmas stockings right off.

15.6% of those surveyed said they would like an electric vehicle for Christmas, while only 13% said they wanted a pickup truck. It’s a shocking stat, given that pickups are on pace to make up about 20% of Canadian new vehicle sales in 2018.

It’s clear that the hipster invasion has moved beyond the coasts. They’re organized and they’re moving into our more landlocked cities. Rumour has it that “electric vehicle” respondents to the Desrosiers survey have been spotted as far in-land as Saskatchewan.

We’ll be farming in skinny jeans before we know it.

Even though Canadians are thinking about electric vehicles while driving gas guzzlers, they’re certainly not buying electric. A recent report by the Angus Reid Institute indicates that only 3% of Canadians drive electric vehicles (with another 5% driving hybrids). 75% of the people surveyed agreed with the following statement: “I’m less inclined to buy an electric vehicle because they’re too expensive.”

Electric vehicles almost hit #1 for Quebec residents, with a 25.6% response rate. It ranked just behind SUVs, at 26.9%.

Even more damning, only 11% said that they value environmental impact as an important consideration when buying a new vehicle. Ahead of it on the list was Brand (20%), Fuel Efficiency (34%), Type of Vehicle (37%) and Price (59%).

56% of people surveyed said that the government should do more incentivize car buyers to choose electric vehicles.

There’s reason for hope, though. If they can legalize the devil’s lettuce, they can do anything, right?

For the fifth straight year, SUVs ranked as the #1 type of vehicle Canadians would like from Santa, with 30% of the vote. More than a third of these respondents were prairie-living folks aged 35-44. Electric vehicles are all fine and good, but they’re no match for an SUV when you have to shovel a tunnel from your house to your vehicle in the morning.

This year’s survey took yet another dump on the van market, with only 5% of people wishing for one. Maybe they’re just being considerate. It’s a lot easier for Santa to fit a dinky little electric vehicle in there than a Honda Odyssey.