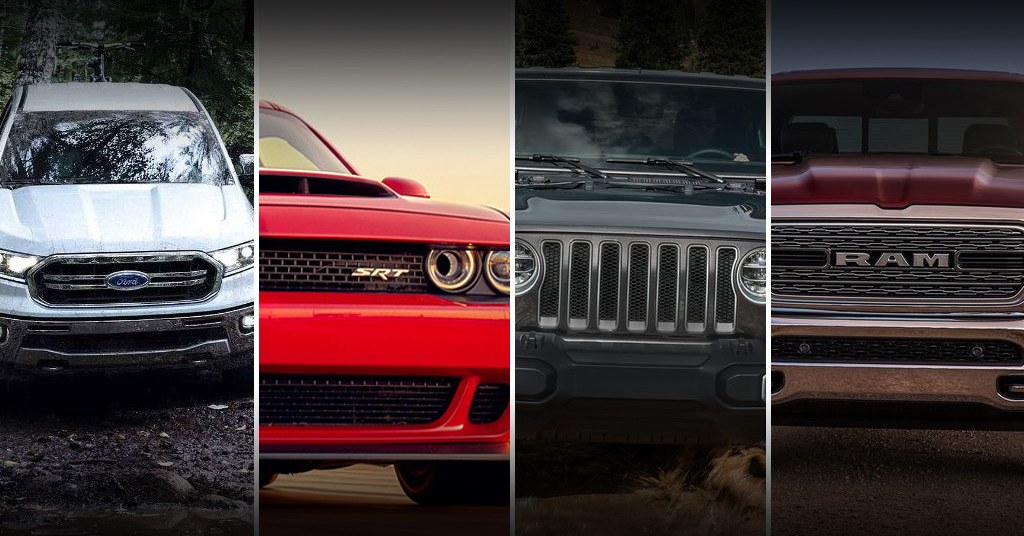 Up until now, our coverage of the Edmonton Motorshow has leaned heavily toward foreign manufacturers. We told you about the new Nissan Kicks, the upgraded Mazda6, and Honda’s surprise hit, the Honda Accord. These are exceptional vehicles, each well worth a test drive, but they don’t tell the full story of the Motorshow. That’s because the North American auto makers delivered an impressive lineup that turned heads. Among these domestic stars are  off-roading giants, towing workhorses, ever-versatile SUVs, and muscle cars loaded with jaw-dropping horsepower.

First off, there’s the 2018 Dodge Challenger SRT Demon. In reality, the SRT Demon isn’t so much a car as it is a rocket on wheels. Seriously, we can’t stress this enough. The SRT Demon is scary fast. Fast to the point that we’re genuinely surprised you don’t need some kind of special permit to drive it.

We won’t get too into the details about what engineering wizardry gets this thing going, but you can’t talk about this car without talking about its engine. Under the hood sits the most powerful V8 engine ever found in a production car: a 6.2-litre Supercharged HEMI V8. It delivers 840 horsepower and 770 lb-ft of torque. Yup, you read that right.

Unfortunately, Dodge only sent 300 of these monsters to Canada, so count yourself lucky if you spot one. But all things considered, it’s probably best for the public good that the SRT Demon is in such short supply. Otherwise, there’s a good chance the QEII highway would become crazier than it already is.

Next on our list of domestic stars, we have the all-new 2019 Ford Ranger. Returning more refined and capable than ever, the 2019 Ranger would make an excellent choice for anyone who needs a pickup every now and again, but for who the power and size of a full-sized truck would be overkill. If you enjoy the outdoors, or if you’re a contractor with moderate trucking needs, this is the truck for you.

There are three trims that are going to be offered: the base XL, the XLT, and the Lariat. Each trim is powered by a 2.3-litre EcoBoost engine, the same engine found in the Ford Mustang EcoBoost. The engine is paired to a 10-speed automatic transmission, and optimizes power using turbocharging and direct gasoline injection.

Equally impressive is the 2019 Ranger’s advanced driver assist and connectivity technologies. The SYNC Connect feature creates an in-vehicle Wi-Fi hotspot that can support up to 10 devices. As well, there’s an 8-inch touchscreen infotainment system that’s compatible with Apple CarPlay and Android Auto. When it comes to driver assists, driver’s will be happy to know that the Ranger includes:

If you’re in the market for mid-size truck, we suggest you wait for the release of the 2019 Ranger. It’ll have plenty of power, lots of tech, and will look pretty damn cool too.

Appearing third on our list is the easily recognized off-roading icon, the 2018 Jeep Wrangler Sahara. Jeep enthusiasts will be happy to know that the latest take on the Wrangler doesn’t betray the brand. It still has the same 4×4 capabilities, the same durability, but more importantly, it still looks like a Jeep.

The 2018 Wrangler Sahara is the most practical model offered. It blends the go-anywhere attitude of top trims with the refinement of luxury oriented Jeeps like the Grand Cherokee. Its 4×4 capacity is more than enough for trekking down muddy trails on the weekend. Yet it’s equally comfortable on paved city streets, which for most you, is what you’ll be driving on most.

Under the hood, you have the choice between a 3.6-litre V6 or a 2.0-litre turbo four. Both engines can be paired to an eight-speed automatic, but the V6 can also be paired with a six-speed manual. Further engineering tweaks, such as the addition of a new, lighter high-strength steel frame, were made to improve fuel economy. What’s more, there isn’t a snow rut too deep to get out of, thanks to the new Selec-Trac 4×4 system. For the first time on a Wrangler, Selec-Trac will automatically switch from 4×2 to 4×4 when the conditions warrant it.

You’ll buy the 2018 Wrangler Sahara for its unmistakable design and off-road performance, but you’ll come to love its interior refinement and smooth ride.

Next up, we have this writer’s favourite of the entire Motorshow: the 2019 Ram 1500. It’s an exceptional vehicle for so many reasons. It outperforms each of its competitors, it’s jam-packed with the most advanced tech, and it looks incredible. Now more than a decade old, the 2019 Ram 1500 has undergone a major transformation this year – and trust us, you’ll love what it’s become.

In addition to a new exterior design, the Ram 1500 has received several other updates that have helped propel it to the top of the trucking food chain. First, it’s now lighter and larger, largely thanks to the use of lighter high-strength steel in the chassis. Also, to help with fuel economy and overall performance, the Ram 1500 has been made much more aerodynamic. Active grille shutters and a front splitter deploy at high speeds to reduce drag and divert air around the truck. And lastly, a class-exclusive active-level four corner air suspension lowers the truck at highway speeds. That will help reduce drag and body roll, the latter being the tilting that occurs when a car turns.

Under the hood, the entry level engine is a 305 horsepower 3.6-litre Pentastar V6. A step above that is the 395 horsepower 5.7-litre HEMI V8 that delivers 410 lb-ft torque. Both engines are available with the cutting-edge eTorque system, which boosts torque considerably and helps with fuel economy. To the 3.6-litre V6, the eTorque system adds 90 lb-ft of torque. When added to the larger 5.7-litre V8, eTorque delivers an extra 130 lb-ft of torque. Max towing and payload capacities are both frighteningly large, at 5,783 kg (12,750 lbs) and 1,043 kg (2,300 lbs), respectively.

Inside, there are all the amenities of a luxury vehicle, and the most advanced entertainment options you could hope for. Sitting in the front seat of the top Limited trim, surrounded by genuine wood and leather finishes, you’ll feel as though you’ve stepped into a scene of the God Father. There’s an available 12-inch touchscreen infotainment system that’s compatible with Apple CarPlay and Android Auto. Also, you can have installed a Harman/Kardon audio system with 19 speakers and 900-watt surround sound. After listening to your tunes in the 2019 Ram 1500, you won’t want to do it any other way.

In short, the 2019 Ram 1500 was the most impressive vehicle the Edmonton Motorshow had to offer. It made significant gains in all the areas people care about, like capability, fuel economy, and technology. But more importantly, it did so without hiking the price too much over that of the 2018 model.

Want to book a test drive?

Edmonton Motorshow: The 2018 Honda Accord Delivers the Biggest Surprise More