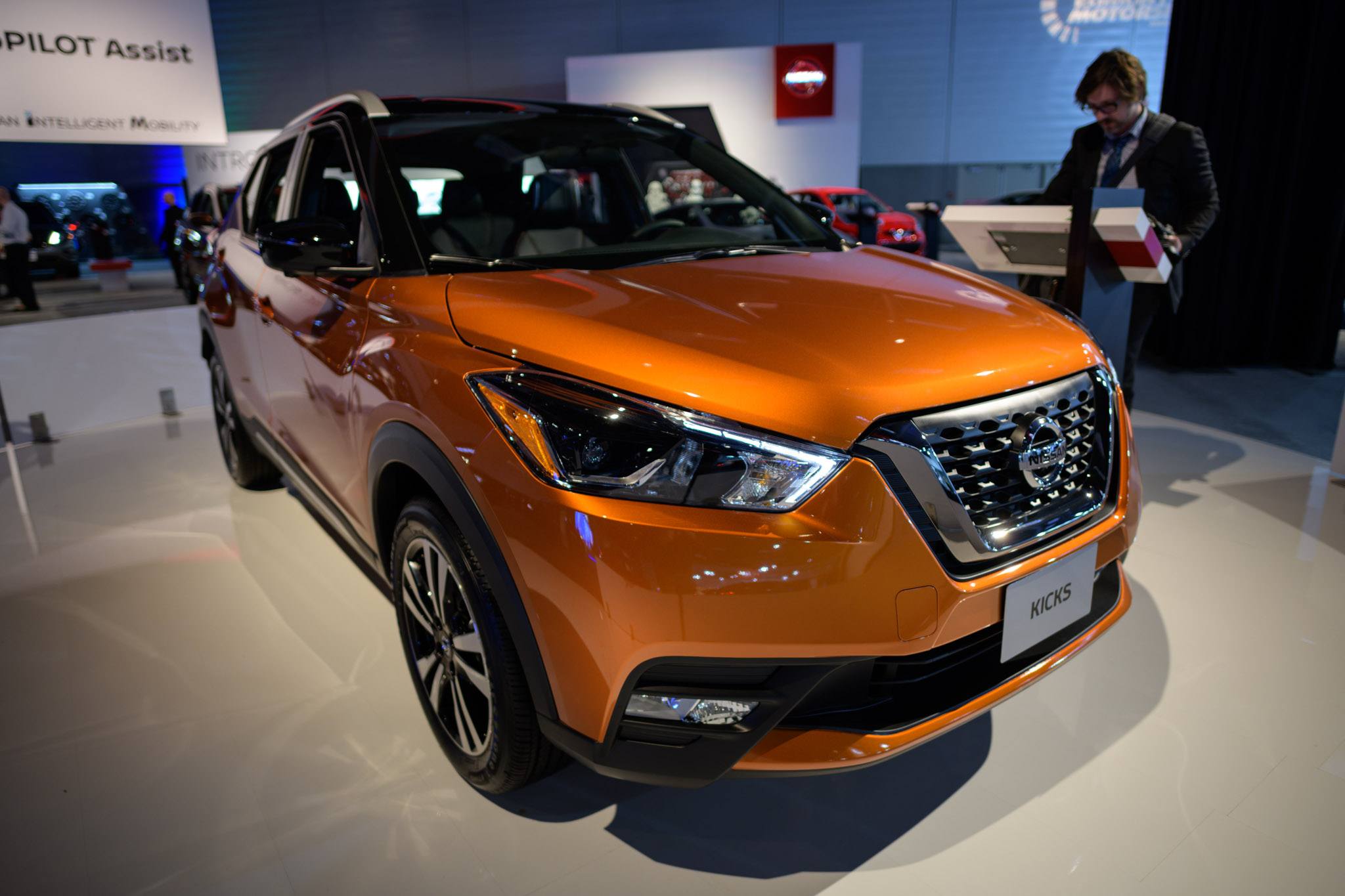 Edmonton, AB–This weekend’s Edmonton Motorshow attendees will get their first look at Nissan’s upcoming entry into the subcompact SUV segment, the unusually named 2018 Nissan Kicks. (Although after last year’s Qashqai release, all bets are off when it comes to nonsensical names.)

The Kicks replaces the Juke as Nissan’s smallest SUV. While its modest 125 HP doesn’t match up to the Juke’s (or any other model in the segment), it packs enough advanced features to make up for it. Plus, it has much more cargo space than its predecessor.

The Kicks made its debut as a concept car during the 2014 Sao Paulo auto show, and garnered enough interest to be put into production last year. It’s already available internationally, and Edmonton drivers should be able to start test driving the Kicks in June.

How it Compares to the Nissan Rogue

Front to back, the Kicks is 3.3 inches shorter than the Rogue Sport. It is 3 inches narrower, about an inch shorter from roof to ground, and the wheelbase is just over an inch shorter.

But the biggest variation is the Kicks’ lack of all-wheel-drive.

However, it’s clear that Nissan’s goal with the small SUV is increased fuel economy. It’s said to deliver a pretty incredible 7.1 L/100 KM, which would rank it right up there among the most fuel-efficient SUVs on the market. For comparison’s sake, the Rogue tops out at more than 8 L/100 KM.

The 2018 Nissan Kicks is an example of great things coming in smaller packages. Just check out its long list of available features:

Get Ready to Turn Heads

Where this small crossover shines, though, is its presentation. Gone is the awkward, bulbous, underwater-creature styling of the Juke. It’s replaced with a slick, modern SUV that features some really interesting lines.

From the gaping grille, to the floating roofline, to the sharp beltline, to the really aggressive back end, the Kicks is a sharp looking vehicle. It’s also available in a few colour combinations, which makes it different than nearly every other vehicle in its class (the Hyundai Kona also allows for two-tone colouring).

Just look at some of the possible combinations.

On the inside you’ll find high quality fabric. The model at the Edmonton Motor Show has some fun orange stitching, too, which is a nice touch. It’s subtle, but it brightens up the entire interior.

The Kicks is surprisingly spacious for such a tightly built vehicle. It offers 25.5 cubic feet of space, which is great. That’s a number you’d expect to find in a compact crossover, and not in a subcompact like the Kicks.

Since the Kicks doesn’t come out until June, Nissan has yet to release pricing.

However, when you consider that it’s slightly older brother, the Qashqai, starts at $19,998, it’s safe to assume that the Kicks will undercut that a bit.

Expect to have a starting price under $19,000. If so, that would compare favourably with subcompact competitors like the new Hyundai Kona, the Honda HR-V, and the Mazda CX-3.

Want to be one of the first to drive the 2018 Nissan Kicks in Edmonton?