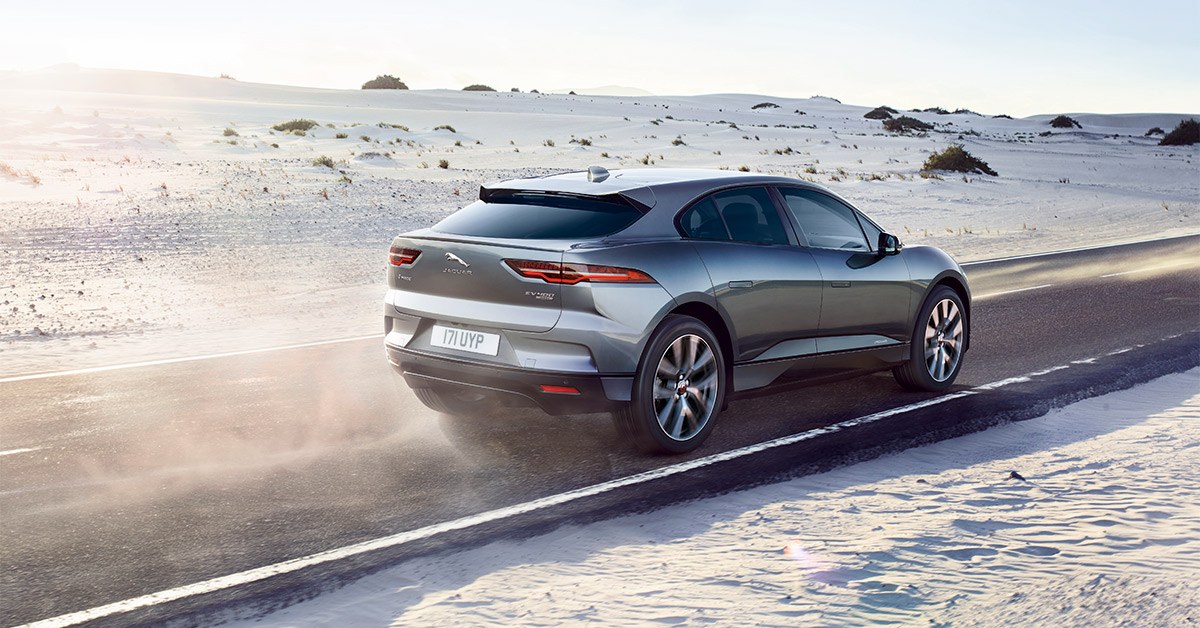 Jaguar introduced the 2019 Jaguar I-Pace in Edmonton last month, which means Tesla is no longer alone in offering luxury electric vehicles. Now, Porsche, BMW, and Mercedes-Benz are all set to make their debuts in the relatively untapped all-electric luxury crossover segment. Jaguar beat them to the punch with the I-Pace; an all-wheel drive, all-electric crossover.

Set to appear in Canada during the second half of 2018, the I-Pace represents major progress for electric vehicles. But more importantly for Canadians, rigorous testing has shown that it can handle extreme temperatures and rugged terrain quite well.

Jaguar put a lot of thought into this venture. It equipped the all-electric crossover with everything it needs to challenge the Tesla Model X SUV and Model S hatchback. Bearing Jaguar’s signature elegant design, sports-car performance standards, state-of-the-art technology, and a lavish interior, it’s set to turn the heads of both green-car and luxury car lovers.

Read on to learn more about the highly-anticipated Jaguar I-Pace, and visit Jaguar Edmonton once you’re done. You’re going to want to be one of the first to test drive the I-Pace in Edmonton when it comes out.

Pricing for the I-Pace in Edmonton is expected to be announced later this month, but in the U.S., pricing is starting around $70,000. That’s a competitive price, considering the Tesla Model X starts around $80,000.

The I-Pace is silent and swift – exactly what you’d expect to get when you marry electric to Jaguar power. According to Jaguar, the vehicle will range to 386 kilometers. Additionally, it will generate a jaw-dropping 384 horsepower and 512 lb-ft of torque, and go from 0-100km/h in 4.8 seconds. If you just peed your pants a little, don’t worry. That’s only natural.

Moreover, because the battery is set within the wheelbase and the two electric motors are integrated with the front and rear axles, the 2019 I-Pace is given a naturally low center of gravity. That means the I-Pace feels much more stable and balanced than your average crossover. For those who prefer the high seating position of an SUV and the handling of a sports-car, the I-Pace is a wise choice.

Furthermore, the I-Pace’s was designed with aerodynamics in mind to help with fuel economy and performance. It has a low hood and roofline, and a grille that directs air through the hood-scoop and over the windshield. These features also have the added benefit of giving the I-Pace an attractive, more Jag-like appearance. The I-Pace doesn’t look like your average electric car, rounded and resembling cereal box toys. Instead, the I-Pace embraces sleek curves and striking accents.

In addition, a self-levelling air suspension system will lower the I-Pace’s body at higher speeds for optimal aerodynamics. It makes the ride more comfortable, and it’ll have you bending around corners as naturally as a NASCAR driver.

The I-Pace is an all-around performer, and with all-wheel drive, it’s capable of transitioning seamlessly from city streets to dirt roads. Power and torque response is instant. Plus, the electric motors can adapt to road conditions and driver inputs automatically to increase your control over the road. Extensive testing has shown the crossover to be more than capable of functioning in rough terrains. As well, testing has shown it can perform in extreme temperatures as low as -40-degrees Celsius. However, Jaguar has yet to comment on what exact effects extreme cold can have on the vehicle’s range.

The I-Pace’s 90 kWh battery takes only 40 minutes to recharge to 80% capacity with a fast charger. With a regular wall box charger, it can take a little over ten hours to charge. Jaguar has also incorporated into the crossover a regenerative braking system. This system will allow drivers to regain some power as they bring the I-Pace to a stop. When you take your foot off the accelerator, the system regenerates the I-Pace’s momentum into power as it slows down.

The 2019 Jaguar I-Pace is outfitted with a wealth of state-of-the-art tech and lavish, yet nevertheless practical accessories. In fact, the I-Pace is so well-equipped that it’s difficult to decide where to begin describing it. Starting inside, the I-Pace blends the most advanced technologies into a rich, yet pleasantly minimalist interior atmosphere. The I-Pace provides an experience truly unlike anything else. After you’ve sat in one once, all other cars will feel like cheap attempts at being cars.

It all begins with a 10-inch touchscreen infotainment system built-directly in the dashboard, and a 5-inch touchscreen below that. To avoid distracting the driver, Jaguar has included a Head-Up Display (HUD) monitor that displays relevant vehicle information. On it, drivers can see data like the speed limit, navigation directions, and road conditions. On top of that, there’s an additional 12.3-inch Interactive Driver Display presenting more data right behind the steering wheel.

You can even stay connected to the I-Pace when you step away from it. With the Remote app, you can stay updated on things like available range and charging status, all from your smartphone.

Music lovers will happy to know that this crossover is built with two Meridian Audio surround sound sound-systems. Combine those with the serene quietness of the cabin, and the I-Pace is transformed into a verifiable concert hall.

Another cool accessory that showcases the I-Pace’s designers’ out-of-the-box thinking is the Activity Key. Practical for outdoors enthusiasts, the Activity Key is a waterproof wristband that locks and unlocks your vehicle upon proximity. As you adventure outside or run errands with the Activity Key, your keys can remain safely stowed inside the I-Pace. It’s a feature you didn’t know you needed until you had it.

The 2019 I-Pace takes connectivity to a whole new level, as befit a luxury vehicle of the 21st century. In addition to the remote app that keeps you linked to the vehicle, the Bluetooth key will recognize you upon approach, and will adjust the seats, air conditioning, and entertainment settings to suit your preferences. It even goes so far as learning to automate these preferences based on your past routines. So, for example, let’s say you like to listen to CBC Radio on the way to work every morning. When you enter the I-Pace in the morning, it will automatically turn on CBC Radio at your usual preferred volume.

The air-conditioning system can even recognize how many passengers there are in the vehicle, and will independently adjust where it directs heat or cool air to relevant areas in order to economize energy. Additionally, with the Connect Pro system, you can set up a 4G Wi-Fi Hotspot in the vehicle. Besides that, the Navigation Pro system displays your map in either 2D or 3D, and provides with you with a detailed summarization of your planned routes, taking into account range, road topology, and speed limits.

Oh, and did we forget to mention that the I-Pace is compatible with Amazon’s Alexa? Because it is.

Beyond the extensive list of top-of-the-line technologies, there’s plenty more to fall in love with inside the I-Pace. Chief designer, Ian Callum, described it as “one of the exciting cars of ever worked on”. It’s easy to tell why. Since there’s no engine, and since the batteries are in the wheelbase, designers were given tons of space to innovate.

Cargo space is surprisingly capacious considering it’s a Jaguar – and a compact crossover Jaguar at that. Trunk space is average for a vehicle of this class, meaning it’s substantial, but nothing to brag about. However, without an engine under the hood, the I-Pace didn’t need the long hood other Jaguars require. That allowed the cabin to be shifted further forward, granting us the space to properly indulge in the interior’s extravagance. The legroom and headspace gained through this design didn’t upset the exterior’s style, either. The I-Pace is still, unmistakably, a Jaguar.

While it may not have as much cargo space as the Tesla Model X, the I-Pace has some small item storage solutions worth praising. There’s a deep console bin under the front center armrest, as well as a handy place to stash your wallet and keys where non-electric vehicles would have a gearbox. To make it even more practical, designers added a large storage space under the length of the rear seats. There’s even a front storage compartment beneath the hood that provides an additional 27 litres of storage. That’s more than enough room for a makeshift cooler an extra carry-on bag.

Lastly, the unsung hero of the I-Pace’s interior is the acoustic laminated glass used on the front windows and windshield. Coupled with the characteristic quietness of the electric motor, these windows work to make the cabin serenely quiet.

The NHTSA and IIHS have yet to evaluate the I-Pace, so it can’t be judged by it’s crash test scores. Even so, the I-Pace does have a long list of innovative active safety and driver assist features to boast of.

First off, adaptive cruise control with steering assist will give you peace of mind on long distance drives. These systems work by automatically maintaining a pre-set distance between you and vehicles ahead of you. Should you begin to stray into the lane over, the steering assist system will gently guide you back into place.

The I-Pace also has an emergency braking system, which uses advanced sensors to help prevent collisions with vehicles, pedestrians, and cyclists. If the sensors detect a potential collision coming, the car will give you audio and visual warnings. If you fail to respond to those, the brakes will automatically be applied.

On top of these helpful systems, drivers can also look forward to having:

… and much more. Finally, the I-Pace is equipped with a system of six airbags, as well as two ISOFIX points for child seats on either end of the rear seats, making it a practical family car.

FINAL VERDICT ON THE 2019 JAGUAR I-PACE

For a long time, there’s been a lack of options in the luxury electric SUV segment. But now that the I-Pace is on the scene, drivers will have a greater variety to choose from. The I-Pace flawlessly combines sports car performance, classic Jaguar refinement, utility, and efficiency into one hell of an electric vehicle. It’s a great car, inside and out, and it represents a big jump forward for electric vehicles all around.

To book a test drive with the 2019 Jaguar I-Pace in Edmonton, get in touch with our vehicle experts at Jaguar Edmonton by clicking here, or give us a call at 780-777-7777. Our goal is to get you into the car that’s right for you.